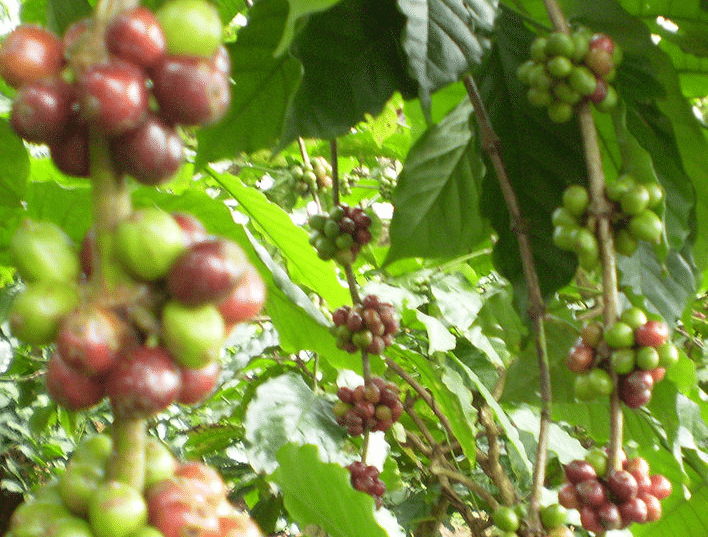 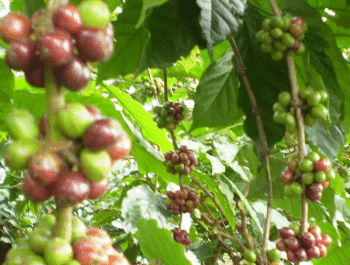 The coffee beans we grind and use to brew coffee come from the Coffea evergreen bush, grown in over 50 countries around the globe. Each year, the Coffee bush flowers and develops a cherry-like fruit, inside which are typically two small seeds or coffee beans. There are 10 different species of Coffea bush, the first of which was discovered in Ethiopia some thousands of years ago.

Once man discovered the coffee bean, its cultivation and use spread to the Middle East, Europe, Asia and beyond. Today, much of the coffee we drink is made from beans that were grown in Latin America, Western Africa, Indonesia and the Philippines, and continental southeastern Asia. Two species of coffee bean — Coffea Arabica and Canephora — constitute more than 90 percent of the coffee beans sold on the international market. Depending on the region, species of coffee, roasting, and preparation, coffee beans can infuse a cup of coffee with a variety of flavors and textures.

Coffee beans grown in Brazil lend coffee a slightly bitter cocoa flavor with rich nutty undertones. A favorite of many, Columbian coffee is very rich and bold, a great morning coffee, with a thick, dark texture and a walnut finish.

The seeds of the Coffea Arabica bush are grown all over the world and account for 75% of the coffee beans we use to make our hot beverages. Arabica beans are very flavorful and contain less caffeine than Canephora beans. Coffea Arabica bushes are grown principally in Western Africa and Latin America. Different regions of these countries are known for producing a different type of coffee bean; that is, a coffee bean lending a different flavor when brewed.

These different region types are called varietals. The climate, soil, weather, and particular plants and seeds give regions their distinctive coffee bean tastes. In Africa, Arabica bean cultivation can be found in Ethiopia, Kenya, Tanzania, and the northern Muslim countries, among others. Ethiopian coffee beans have an easy, smooth flavor and are delightfully accented by floral notes. Kenyan coffees are also smooth, but a bit tartier than Ethiopian beans. They have a pleasantly fruity aftertaste, as does coffee brewed from Tanzanian beans. These beans are a lovely afternoon coffee, with a milder texture and flavor than its northern counterparts.

A great variety of coffee bean flavors come from Latin America. Coffee beans grown in Brazil lend coffee a slightly bitter cocoa flavor with rich nutty undertones. A favorite of many, Columbian coffee is very rich and bold, a great morning coffee, with a thick, dark texture and a walnut finish. Costa Rican coffee beans are similar to Brazilian, but have a lighter, sharper, almost tangy flavor. Mexico is also a great producer of coffee beans.

The beans here vary in flavor and texture, from dry and light to thicker and deeper in complexion and flavor. Although many of the beans grown in Latin America are of the Arabica variety, some regions grow Canephora bushes. The seeds of the Coffea Canephora bush have fewer oils — and in lesser quantities — than Arabica beans do. Less oil and higher acidity give coffees brewed from these beans a slightly more bitter quality. Despite this, Canephora is still a very popular coffee bean, used worldwide in cheap, canned coffee blends and expensive espresso roasts. Canephora beans typically have almost 50% more caffeine than Arabica beans.

Canephora beans are more widely cultivated in Asia than Arabica. These varietals are known for having a more acidic and bitter, although not unpleasant, flavor. Most of the coffee beans we use come from island nations in Asia, such as Sumatra and the island of Komodo. Coffees brewed from these regional beans have a full texture and a slightly acrid, herbal flavor. Java and Kona varietals are especially popular and make a wonderful morning coffee due to their earthy, almost stringent quality.

Other factors that influence the taste of a coffee bean or cup of coffee are roasting methods and final preparation. As a rule of thumb, the greater the amount of time spent roasting, the darker, more full-bodied, and flavorful a coffee will be. Although coffee beans lose essential oils — and caffeine — during roasting, they change chemically during the roasting process, and acquire new, different and flavorful oils.

The darkest roast is known as Italian, which is preceded by French, Full City, City, American, and other, lighter coffee roasts. French roasts are used to make espresso, because they have a high oil content and low acidity. City roast is common in western United States, and American roast is synonymous with eastern cities, including New York and Boston. These coffees are often produced using the drip method. Some people opt for a French press, the use of which results in a stronger flavor and oily texture. Using an espresso machine to brew coffee also lends the coffee a strong flavor, as well as higher caffeine content.

Craig Elliott – About the Author: Craig Elliott is a freelance writer who writes about topics pertaining to the food and beverage industry such as Coffee | Coffee Beans